To say the least, this post has been a VERY long time in coming. It’s amazing how one trip can mess up the beautiful little routines that we had going on at our house. Jace would sleep about 12 hours every night and parenting seemed to be sort of easy. Our little vacay to Hawaii was our wake up call, and we are still trying to recover. You think Jet lag is tough on adults?

But while we were there, we had such an amazing time! We definitely want to go back and visit some of the other islands. I had a layover in Oahu, but it was a hugely populated and busy city, so  I didn’t venture out of the airport. Nate and I want to go back and visit Kaui which is where they filmed LOST. But Maui was absolutely fantastic. The smells were amazing and the Maui Gold pineapple was the best on earth. Jace did pretty dang close to PERFECT on our flights. The last 45 mins of our 6 hour flight were the hardest. He didn’t scream uncontrollably, but he fussed. I nearly cried with relief when we landed. Here is a picture of us in the Honolulu airport. We sent this picture to Nate to report in on our status. We had to fly separate flights since his ticket was booked through the corporate travel agent. 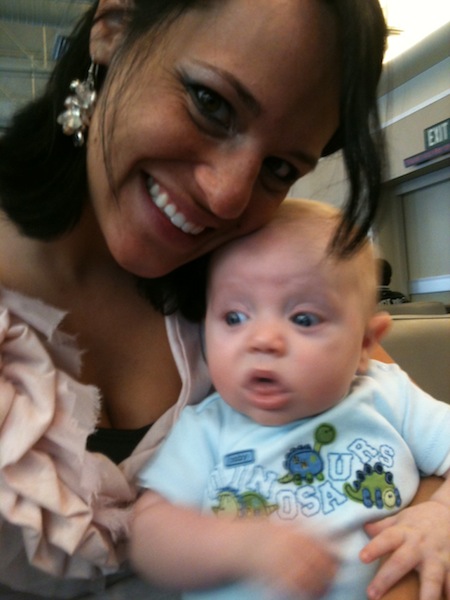 Nate sent this one in return from his iPhone and it made me SO ANXIOUS to catch up to him in Kapalua on the Northshore of Maui. 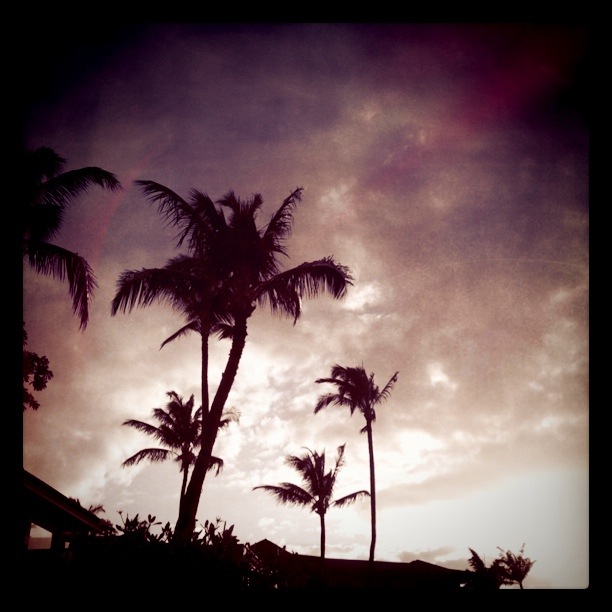 The event that Nate was hired to cover was at the Ritz… and what an amazing resort it was, like a little slice of heaven.

He also took this very “NATE” picture of himself while waiting for Jace and I get there. I LOVE it.

Immediately upon arrival, we made fast friends with all the people there that Nate was working with. EVERYONE was such a blast, and I enjoyed sharing Jace as they passed him around.

During one of the nights off, we went out with a few couples from the group for a night out on the town. While the boys took the Jeep Wrangler, the ladies took the CONVERTIBLE, BABY! WAHOO!! I felt like I was in high school again… speeding down the highway alongside the beach, and blasting the radio with the fresh Hawaiian air in our hair. We were like little girls!!

We went out to an amazing local grill called Kimo’s in Lahaina. The food was ridiculous and I WISH that we had gotten a picture of the Hula Pie. It was SO ginormous that the 6 of us shared it and it was more than enough. It was a huge slice of chocolate chip ice cream pie with an oreo chocolate crust.

As if that wasn’t enough for dessert… we HAD to go to Ululani’s to get shaved ice. No lie, that cone was nearly as big as Jace’s head… if not bigger. Nate and I shared a Mango/Passionfruit with sweetened condensed milk and coconut sprinkled all on top. TO DIE FOR!!! Afterwards, we went for a walk on the boardwalk, and burned a whole 2 calories. It was a gorgeous night.

The company treated their ‘winners’ to a whole bunch of adventures and Nate got to tag a long to all of them! First was a snorkeling trip on a 70 foot Catamaran named Shangrila. Nate said that it was THE BEST snorkeling he had ever seen in his life. The next day was an early morning deepsea fishing trip. Unfortunately, nothing was caught. : (

The day after that, they went on a pretty intense zipline canopy tour. No, no. That hot blonde is NOT me. I was back at the resort with Jace. ; )

Jace and I most definitely had a ton of fun NOT in the sun. Haha! I would never have imagined that any baby of mine would be as fair as he is. I’ve got my own little Casper… with transparent skin. I wanted to be really careful not to get him burned. As you can tell from this picture, he was NOT a huge fan of that hat. I, however, am a big fan. He looks like Gilligan!

We also taught him his first swimming lesson. It wasn’t much of ‘lesson’, per se. But he definitely knows that when you’re legs are in the water, you’ve got to KICK!!

By the end of our vacation, I was actually REALLY disappointed because I felt like we didn’t have ANY pictures of us!! : ( So right after we checked out, and before we had to head to the airport, I got Nate to set up the trusty old tripod and take some pictures of us. YAY! I love that first picture, not only because Nate is ABOUT TO BE SLIMED [hehe!], but because you can tell by the expressions on our faces how enamored we are by our little boy.

Nate’s done it again. I can’t believe how lucky I have been to have traveled to so many  places with him. It is my favorite thing to do in the world. He is the BEST travel buddy and I’m so grateful for all his hard work and dedication. He is truly an amazing photographer and more and more people around the world are beginning to realize that.

Brit - That’s awesome!!!! What a fun trip! Kyle & decided that one day soon we need to take some travel time with you two!

Kelley - Those pictures are stunning. You guys all look great! I think it’s great you’re instilling the travel bug in Jace so early.

Shalse - oh i love your blog luisa!!! it’s beautiful! hawaii was amazing and i am so happy that we got to meet you guys and that handsome jace! keep in touch!!! xoxo

Pops - Mom and I have LOVED your Hawaii photos. Of course, my personal favorites usually include Jace. The swim lesson was adorable! He looked a little CONCERNED!

Always good to see the Adventure Family on the go!