I came upon this ‘List of Accomplishments’ on the blog of a dear friend. Karen, thanks for the fun idea! She added a few additions to the bottom and we will do the same. Highlighted in red, are the items that either one of us has completed, together or separately. Upon seeing the finished product of this post, I have been shocked and amazed at how LUCKY we have been. To our AMAZING PARENTS, who have taught us how to live to the fullest… thank you. 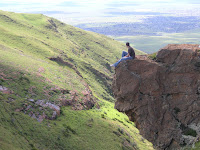 1. Started your own blog2. Slept under the stars3. Played in a band4. Visited Hawaii5. Watched a meteor shower6. Given more than you can afford to charity7. Been to Disneyland 8. Climbed a mountain9. Held a praying mantis

10. Sang a solo11. Bungee jumped12. Visited Paris13. Watched a lightning storm 14. Taught yourself an art from scratch15. Adopted a child16. Had food poisoning17. Walked to the top of the Statue of Liberty18. Grown your own vegetables

28. Ridden in a gondola in Venice29. Seen a total eclipse30. Watched a sunrise or sunset31. Hit a home run32. Been on a cruise33. Seen Niagara Falls in person34. Visited the birthplace of your ancestors35. Seen an Amish community36. Learned a new language37. Had enough money to be truly satisfied38. Seen the Leaning Tower of Pisa in person39. Gone rock climbing40. Seen Michelangelo’s David41. Sung karaoke

42. Seen Old Faithful geyser erupt43. Bought a stranger a meal at a restaurant44. Visited Africa45. Walked on a beach by moonlight46. Been transported in an ambulance47. Had your portrait painted48. Gone deep sea fishing49. Seen the Sistine Chapel in person50. Been to the top of the Eiffel Tower in Paris51. Gone scuba diving or snorkeling

52. Kissed or danced in the rain53. Played in the mud54. Gone to a drive-in theater55. Been in a movie 56. Visited the Great Wall of China57. Started a business58. Taken a martial arts class59. Visited Russia60. Served at a soup kitchen61. Sold Girl Scout Cookies62. Gone whale watching63. Got flowers for no reason

74. Toured the Everglades75. Been fired from a job76. Seen the Changing of the Guards in London77. Broken a bone78. Been on a speeding motorcycle79. Seen the Grand Canyon in person80. Published a book81. Visited the Vatican82. Bought a brand new car83. Walked in Jerusalem

84. Had your picture in the newspaper85. Read the entire Bible86. Visited the White House87. Killed and prepared an animal for eating88. Had chickenpox89. Saved someone’s life90. Sat on a jury91. Met someone famous92. Joined a book club

These are mine:
110. Held a crying child

111. Breathed fire
112. Ridden an electronic rodeo bull
113. Ridden a bike with no hands
114. Driven the United States from coast to coast

These are Nate’s:
121. Been indoor skydiving
122. Ridden a donkey
123. Eaten chicken feet, or cow intestines/stomach
124. Seen a broadway musical in NYC
125. Wrestled with lions

« Before Spring Arrives… Herbert the Handsome… »

I want to talk to you about our Washington trip (via Boise) in July. I don't have a phone number or e-mail for you. So if you would please e-mail me or call me, I would love it! Thanks Linda & Dolan (dolanlinda@q.com (435-563-0557). I'm assuming you must be busy. I have missed your posts.

The two of you have had some amazing and unique experiences–and you’ve only just begun! We love watching that list grow with adventures and accomplishments. You are living extraordinary lives!

Shannon - Love it. Especially the pictures you added as proof, especially the karaoke one (Rockin Nate) How many babies have you been able to stop crying while you have held them?