Posted in Uncategorized
It all started with my least favorite item of our landscape. It quickly turned into an obsession. 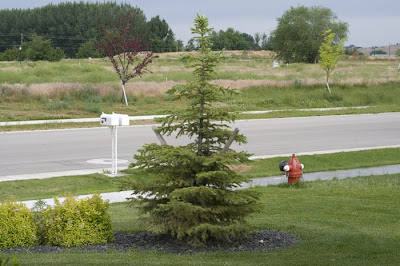 On May 14th, we discovered: 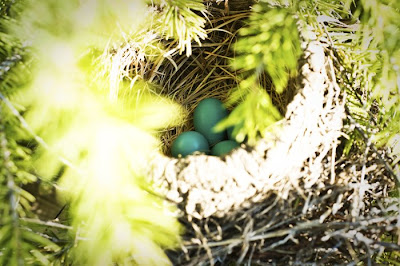 From then on, every single day I’d venture outside to monitor the progress.
Unfortunately, we lost one in gestation. 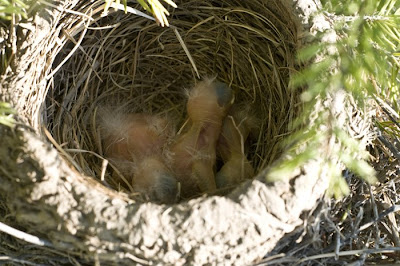 I think Larry there in the back looks like a dinosaur. June 1st

Moe seems almost human here, the way he sleeps with his mouth wide open. He probably has some drool stains on his pillowcase.

Curly, lookin‘ a little grumpy on the left, with his Einstein hairdo. June 3rd

“Honestly? That weird human is back again. Doesn’t she have anything better to be doing? She’s pretty much obsessing over our kids. Nice catch, by the way.”

June 8th: Up until this point, I had been a part of these birds lives every single day since birth. I THOUGHT we had a connection. I was wrong. I didn’t mean for IT to happen.

I approached the nest as I usually do to get my daily picture. Apparently, Larry wasn’t expecting me because when I said ‘Good Morning’, I scared the poop out of him…

…and he TOOK OFF hopping across our front lawn. I get a quick shot of Moe with poo in his eye, and start squeeling uncontrollably as I chase after Larry!

Nate comes to see what the commotion is all about, calms me down, and we trap Larry in a corner.

We decide we should put him back in the nest, but we were concerned that if we grabbed him, the human scent would scare away his parents. Thank goodness for cheap Target dinner napkins. Nate figured it was better than direct contact.

We tried twice to return him to his bassinet. Finally, he stayed and got comfortable with his brothers.

The next day, June 9th, the Stooges were 13 days old… I saw Curly hopping around on the branches of their little tree. So I grab the camera and head out…

He TAKES OFF right when I get there!!!

I peak in the nest… and find it… vacant.
Nate and I are now empty nesters.

[I took a picture every single day from the egg to the empty nest. From start to finish, I had about 70 pictures of the Stooges!! Nate convinced me NOT to use them all on my post, but to whittle it down to the bare necessities to tell a better story. ALSO! The day of the big event, Curly got ATTACKED by crows!! He flew from his nest into a small tree across the street and they started pecking at him!!! I scared them away though. I guess that would explain why baby robins have a 24% survival rate. I've seen the Stooges following their parents around a couple times since then.]
Fun Facts:

Linda - My kids loved this story. They think you are very lucky to have that in your front yard. And seeing what great parents you are to baby birds, I have no worries about leaving Kaia with you. I hope you are still up for it! See you soon!

Mandy - hahaha! What a cute post! I want baby birds too!!!