… The Denver Series!! Last year we hosted the Annual Perkes Family Reunion here in Idaho. We spent a day down here in Boise but mostly we were up in McCall. Nate and I arrived a day early to Denver in order to photograph Nate’s oldest brother, Josh and his BEAUTIFUL family. They had chosen a downtown park as a fantastic location. 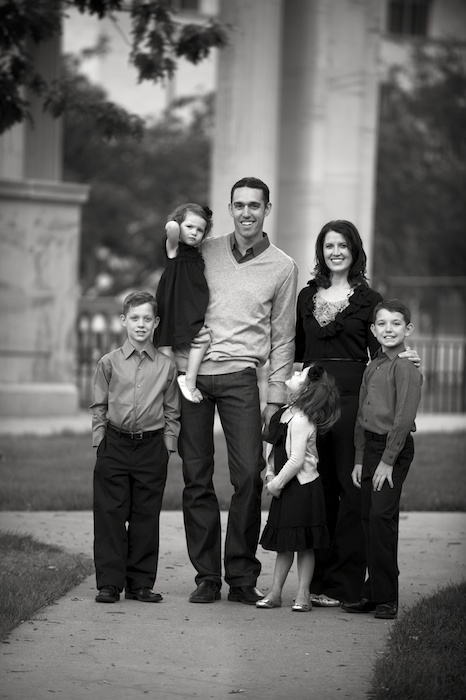 Cousin Love: There is no way that Jace could complain about feeling ignored or lonely during the reunion. His cousins just loved on him the entire time with lots of hugs and kisses [and the occassional headbutt.. ooops! ; ) ]

The only thing better than being together, is being together all playing separate electronic devices. The Daddy’s of these giga-nerds weren’t very good examples. Nate and his brothers spent any moment they could playing some golf game against each other on their phones. 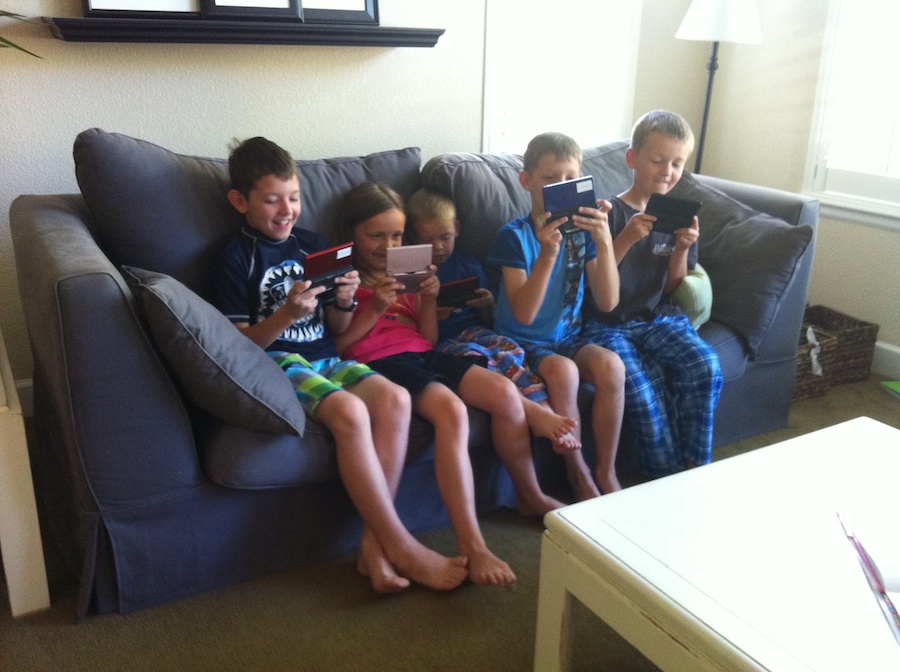 The first couple of days were our water activities! The first day we went to the community pool and the next day, we spent the entire time at Water World… the largest water park in the entire US!!!

Have you seen ‘Finding Nemo’? Every time I see these pictures I think: ‘Shark Bait…  Ooh Ha ha.’

Here is Nate and Max on one of the Water Park Rides. I thought that sled looked a little too small for two grown men over 6′ tall.

Our brother Buck let Nate use his underwater camera and Nate LOVED it. These couple of pictures are only a small selection of the dozens of pictures that Nate took.

He has a great underwater smile…

I present, a previously undiscovered species: The Cross-Eyed Platypus…

While the girls got to leave the kidlets with the Daddy’s to head to the spa, the boys took the kids to the park to play some football!

After us girls returned home, we sent the boys out to play laser tag, which they did… but they also made an extra stop on the way home. It still trips me up just looking at it. Haha!! And wait a minute! Were they mocking us?

Mom & Dad go ALL out with their plans and preparations to show the kids a GREAT time. Making memories, having fun, winning prizes, learning lessons, sharing, team work, creativity, laughing A LOT and expending ALL energy is an accurate description of a typical activity with the Perkes. We had SO MUCH FUN, adults and children alike, during our own homemade RODEO!!

We had a shoot out with water guns…

… we raced delivering mail on the Pony Express… we locked up a bunch of bandits in jail… we lassoed some heifers… and we collected some piglet tails [my personal favorite].

The day after that, as if we hadn’t had enough fun already, we went to the ‘Garden of the Gods’ National Park to have the Kids Annual Scavenger Hunt. It was the favorite event of last years reunion.

The park was GORGEOUS! The sandstone and limestone formations were beautiful and majestic. Numerous times we felt like we had transported back to some ‘Land Before Time’ movie set.

Here are some of the kidlets deciphering one of the clues…

As you can tell by the head gear, a ‘PIT OF SNAKES’ was one of the dangers encountered by the children on their quest…

I wonder if the kids knew about the creature spying on them… ; )

This is Jack-Jack, our newest nephew. He is the closest in age to Jace and is an absolute delight! He is super friendly, speaks sign language and is beloved by the whole family. He is a doll.

Here is Natey after a long day at the park. Guaranteed EVERYONE felt the same way. Beside him was one of the prizes: ‘A DINOSAUR EGG!’

Believe it or not, we had plans for that evening as well: THE DENVER ROCKIES GAME! I would never watch baseball on TV and have no real interest in the series… BUT THE GAMES IN REAL LIFE?!?! They are so much fun. Unfortunately, we had to park about 6-7 blocks away from the stadium. After a day of hiking through the Garden of the Gods, and being accompanied by our darling, newly-pregnant sister, Jeralyn [YAYYY!!!] we decided to commandeer the services of Ronald, a local chariot driver:

The atmosphere, the food, the entertainment, the music. It was all intoxicating, although some might have disagreed. Here are some Instagram pictures that Nate took at the game:

As if we hadn’t had enough fun already, Nate and I decided to go Indoor Sky Diving on our last day. It was one of our favorite past times when we lived in Denver. It is THE closest to flying that you will EVER feel, as opposed to real sky diving where you are just falling. Nate is SOO good at it. He’s mastered all the spins, and the ability to move forward and backwards, up and down with no problems.

Here is Nate during his first flight. I, however, got in trouble for having the phone in the tunnel with us, and so Nate couldn’t record me… Stink.

The last day of the reunion, we wanted to take a big family picture. Haha!! It was quite the feat. Trying to get 10 little children to look at the camera and smile simultaneously was near impossible. A couple of our little ones just couldn’t take the pressure.

Personally, I would argue that THIS is probably the most accurate portrayal of us. Sigh. I LOVE this family.

As the closing ceremonies to this momentous event, Mom and Dad took the opportunity to teach us, adults and children alike. I LOVE that. Us parents may be all grown up, but that most definitely doesn’t mean that we are done learning. We are still somebodies children. At the beginning of the fireside, they called the children to meet them in the basement. I was asked to come help with Jace’s preparations. When I walked into the room, the children were dressed in authentic, beautiful armor. My little nephew, Ben yells: ‘Wisa, look!’ And thrusting his sword in the air he yelled: ‘We are the Army of Helaman!!!’ Even as I type this, my chest constricts with emotion at the feeling in that room. Purity, excitement, courage, power, hope. I passed my little peanut off to Dad, and he presented him to the room and explained that the inspiration for this fireside came from Jace’s blessing, when Nate blessed him with ‘strength and courage.’ After polling the children later that day, they all agreed that this was their favorite part of the whole reunion.

I was humbled that evening. Dad said that he hoped we could catch a glimpse at the TRUE nature of the heroes that stood in our midst. They are, in all actuality, warriors of truth. They are the hope for our future and most importantly, WE are responsible for ARMING them, preparing them, training them in the ways of truth and righteousness. For those who might read this that are not LDS, the ‘Army of Helaman’ is the scriptural account of an army of 2,000 youth who were forced to defend their country from destruction. Not one soldier was lost, which they attributed to the faith of their mothers. It is a beautiful story. I was left with a profound sense of graveity that evening. I held my little warrior as he slept in my arms and I feared for him. At the same time, I was filled with such peace and JOY. Those little ones, every single one, has such a deep and resounding goodness. I should have no reason to fear for my family. I have been given everything that I need to protect them, and they were born already strong, already courageous… prepared before they were born for a great destiny and purpose.

What a PERFECT reunion. We laughed… we cried… we reminisced… we were taught… we played… we ate… we REJOICED at the chance to be in each others company and feel of each others love. Thank you, Josh and Brooke, for having us, and Mom and Dad for…. everything else. : )

Lisa Van Gemert - I came across this looking for cowboy party ideas (random, I know), and I was reading, I was thinking, oh, they have to be LDS. Then I got to the Army of Helaman (formidable), and I knew. What great inspiration in so many ways. Thank you for sharing.

I loved this post! You captured everything so beautifully and I’m really glad you didn’t say anything about Nate beating me in chess.

Jen Perkes - Luisa,
You have so beautifully captured our week! Thank you! Thank you! Thank you! It was such a blessing to be with everyone as we got caught up on our lives, laughed, ate, played games and competitions, and had wild adventures. My favorite thing was sitting back and observing how much our sons and daughters and amazing grandchildren truly love each other and enjoy just being together. My joy is full!!
Hugs and luvs,
; )
Mom